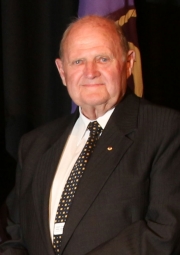 Alan Overton AM was the Greater Western Sydney Region President from June 1994 until his retirement due to ill health on the 19th February 2016 a period of almost 22 years!

He was also the New South Wales Branch Vice President from July 1999 until 19th February 2016.

The Region Executive Committee has decided to honour Alan by setting up an award in his name and the following conditions will apply:

If you have any enquiries or would like to nominate someone, please email the Region Commissioner - 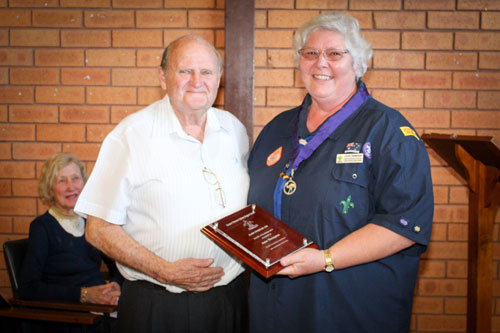 Alan Overton joined 1st Granville Cub Scouts as an 8 year old in early 1945 just before the end of World War 2. He continued to be a member of the association as a Scout, Senior Scout and Rover with the Group.

He has continued his association with 1st Granville for the past 71 years and is still a member of the Granville Old Boys which meet annually at the group headquarters in Glen Street Granville.

Alan was a mover and shaker in the construction of the 1st Mays Hill Scout Hall in Monterey Street South Wentworthville. He helped in fundraising and as an employee obtained financial assistance from James Hardie. When the hall was officially opened in 1976 by Alderman Devlin from Holroyd Council, Alan was the Group President. A plaque is still on the wall at the hall celebrating the opening even though the group has long since ceased to exist.

In June 1994, Alan agreed to take on the position as Area President of Cumberland Area (now Greater Western Sydney Region) and gave excellent service in the role until February 2016 when he retired due to ill health. In the past 22 years Alan has not missed seeing Cumberland Gang Show and is looking forward to seeing many more.

Alan had a soft spot for extension scouting he was responsible for the group starting in Arthur Street Granville and with the financial assistance of James Hardie and Parramatta Leagues Club he assisted with modification of the hall to take wheelchairs and make access easier for the scout members. Alan took on the role of Group Treasurer in 1997 and held that role for seven years.

As if he was not busy enough with his other community obligations, Alan became the New South Wales Branch Vice President in 1999 and held this position for 17 years before retiring in February 2016. He was elected as a Branch Life Councilor in 2004.

Alan was recognised for his services to scouting in 2004 by being awarded the National Presidents Award. He was awarded Order of Australia Medal (OAM) in the 1994 Queens Birthday Honors List in 1994 for “Services to the Parramatta Rugby League Football Club and to the Community”. He was further honoured with an Australia Medal (AM) in the Australia Day Honors List in 2004 for “Service through a range of sports clubs and other Organisations”.

His other great loves after Scouting is the Parramatta Rugby League Football Club (EELS) and Parramatta Leagues Club Limited where he was the President from 1985 to 2009 – 24 years.

At one stage, in the past few years, Alan was involved with 29 organisations and has been recognized with 16 awards from non scouting groups.

The Greater Western Sydney Region Executive Committee has decided to set up an award in the name of “Alan Overton AM” which will be awarded each year to supporters, committee members or leaders in GWS and can be nominated by anyone and a decision will be made by a committee of 3 people.

Thanks for your tremendous service to scouting and we wish you well in the future.