Sixty two Adult Members of Greater Western Sydney Region were honoured by the Chief Scout of Australia, His Excellency, Governor-General the Honourable Sir Peter Cosgrove AK MC (Retd) in the annual Adult Recognition Awards for good service, part of The Scout Association's observance of the founding of Scouting at the first Scout Camp held at Brownsea Island in the UK on 1 August 1907.

Congratulations to all the recipients for 2018 and thank you for your continuing commitment to Scouting!

For the full list of 2018 NSW recipients, please visit www.nsw.scouts.com.au Presented to Supporters for at least 18 years of distinguished service to the Scout Association. 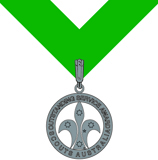 Presented to adult Members and Associates for the successful support, development or management of a section or formation, or for an intense contributuion over a period of at least 12 months to the success of a major event or major activity.